It has been a repeated question of ourselves that when will I get married and to whom? Not only the individual, but even the parents are also more interested to know the marriage forecast. Since marriage is considered as an important aspect in every individual, the expectation will always be. Everybody shoots different types of questions about their marriage and let us see the same here. 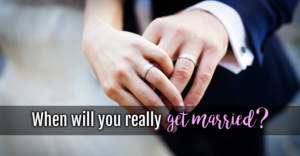 Marriage astrology is a specific task, and it contains three major parts, i.e., knowing the exact time of marriage, marriage matching, and understanding marital happiness. Generally, natal chart and navamsa chart are used, but in some cases, those who do not have their navamsa chart the marriage prediction can be calculated with the native’s date of birth. Nowadays, after getting information about the date of birth, time of birth, and place of birth, the natal chart is structured quickly.

The power of the 7th house:

The 7th house in a natal chart decides marriage and represents the kind of relationship with the partner. Sometimes we may not properly marry but lead live-in relation for some years which can also be predicted here. Indian astrology is a vault of mysterious. When will I get married Indian astrology will bring you the clear result, we assure. After analyzing the 7th house, the nature and position of the planet Jupiter and aspects of the 5th house will be studied to obtain the date prediction of marriage. When the native’s horoscope is inspected by planets like Saturn, Jupiter, Sun, and Venus, the marriage prospects are foretold. The said planets are important when we discuss marriage. When all these planets influence the native’s 7th house, the person will definitely have early, successful, and longstanding marital life.

If a native has Venus along with the Lagna’s lord, then it represents a strong sign of marriage. The distance between Venus and its ascendant planet is straightly proportional to the marriage prospected in one’s Kundli.

Alongside, it is an essential aspect to check whether the pair has Manglik. Mangal Dosha is determined by the placement of the planet Mars in one’s horoscope. Based on the different aspects of Mars, mangal Dosha may be high or low. However, a Manglik should marry to a Manglik only. Otherwise, there would be a lot of struggles, separation; even death may occur.

Some principles based on the Indian astrology are given here at what age you will get married:

Powerful planets more than 1 in the 7th house – marriage may occur before the age of 24, and you have a chance for 2nd marriage.