Do you need money? Here is some tips for consistent money income you can generate. Check this 5 easy steps to generate consistent income with help of lord shiva. 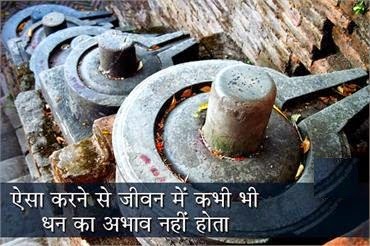 In religious scripture lord Shiva shows as a father of world because he is everywhere and complete Brahma. Shiva’s meaning is welfare. The meaning of Ling is creation. Shivaling worship because it creates the power. There is Brahma in the original, Vishnu in the middle and Shiva on the top.

1. You should go to the Shiva’s temple every day and post rice on Shivaling. By posting rice on the Shivaling there is no shortage of money at the home.

2. You should go to the Shiva temple in the evening and do lamp and donate something. People who do this they do not have shortage of money in their life.

3. Mantra is the best instrument for desire. If you face on west side and do mantra then it gives money, splendor and fortune. Take Rudarksh’s rosary and chant Shiva Mantra according to your desire.

4. If there is a loss of money then you should do chant of Mahamrutanajay Mantra.

5. You should offer Panjiri to the lord Shiva on Monday. You should give this dainty to idols, elderly, poor’s, friends and family and then you have to eat it.